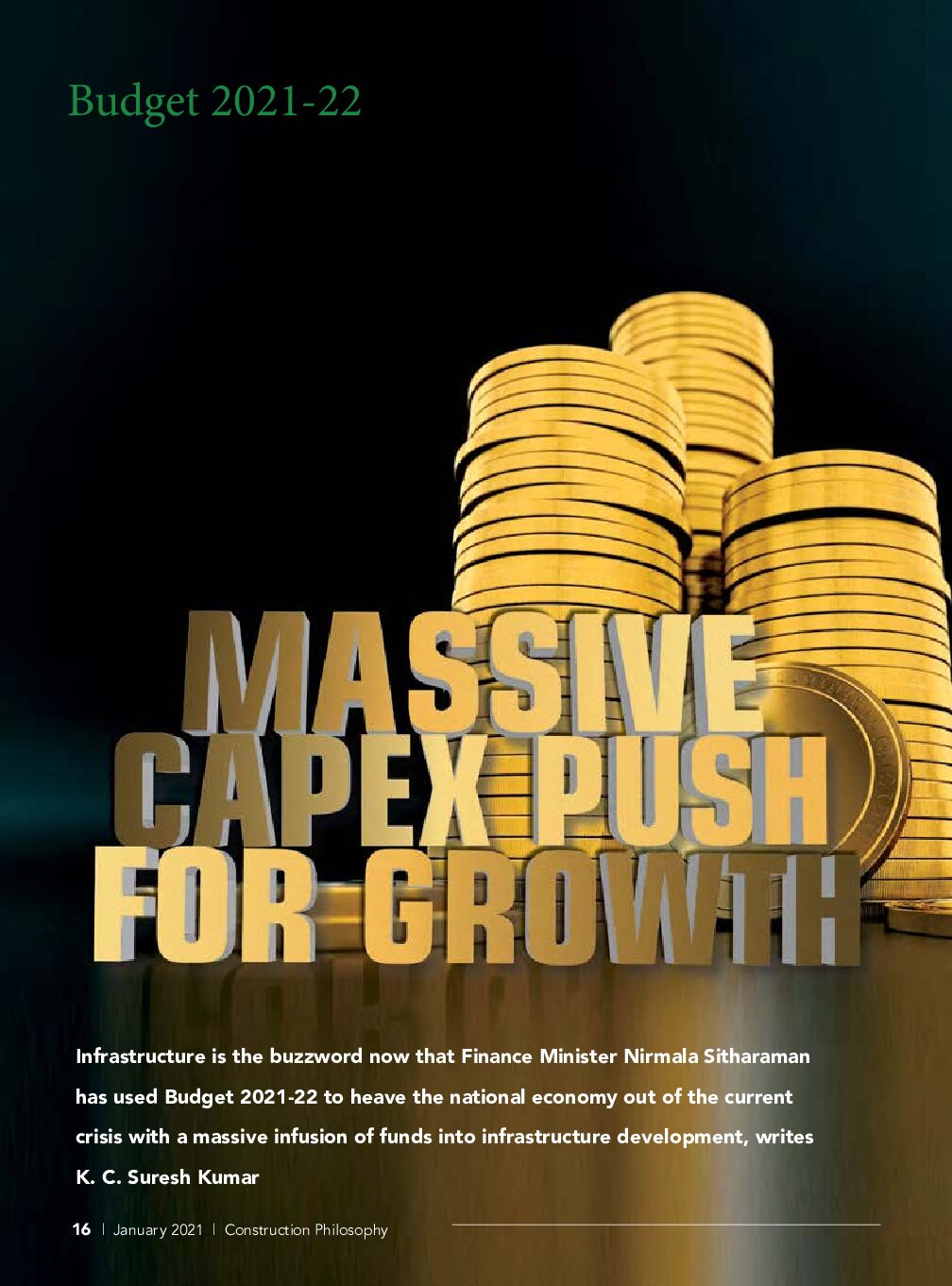 “Infrastructure is the buzzword now that Finance Minister Nirmala Sitharaman has used Budget 2021-22 to heave the national economy out of the current crisis with a massive infusion of funds into infrastructure development”,

F or a nation that has been reeling under the impact of total and rolling shutdowns consequent upon the Covid-19 outbreak, the Budget 2021-21, presented in Parlament on February 1 by Finance Minister NIramala Sithamaran, marks a welcome relief. The Finance Minister has chosen to lay emphasis on infrastructure development with huge capital infusion, which augurs well for the economy not just during 2021-22, but also in the years to come. From ₹4.39 lakh crore in 2020-21, the allocation for capital expenditure during the coming fiscal has been raised to ₹5.54 lakh crore. This is nothing short of a quantum leap and should see accelerated spending on physical infrastructure, healthcare, job generation, and rural development. Any investment in infrastructure is bound to have
long-term multiplier effect as it triggers economic activities, resulting in job generation and more money in the pockets of the people. While raising the allocation for capital expenditure, the Finance Minister has taken the deliberate decision not to be constrained by the fear of breaching the fiscal deficit cap that the government had set for itself. The promise now is to limit the fiscal deficit to 4.5% of the GDP by 2025-26

Record outlays
The outlay for road and highway infrastructure development is a record ₹1.18 lakh crore, which marks an almost 18% increase over the Budget estimates for 2020-21. The Ministry of Road Transport and Highways (MoRTH) has been working overtime to cover unprecedented distances in road transport and highway development, the current target being construction of 11,000-km of National Highways during the current fiscal. Together,
Tamil Nadu, Kerala, West Bengal and Assam would get ₹2.27 lakh crore for highway development projects.

Highway riding would become safer with the construction of four and six-lane highways with advanced traffic management systems, speed radars, variable message signboards, and GPS enabled recovery vans. The National Highway Authority of India (NHAI) would be permitted to go for market borrowing to the tune of ₹65,000
crore. As much as 8,500 km of road projects will be awarded in 2021-22.
The National Infrastructure Pipeline, launched with 6,835 projects in 2019, has now been expanded to 7,400 projects. It will result in incremental aggregate demand in the economy, create more jobs, and make industries more cost-efficient by reducing the cost of logistics and transportation.

REITs & InvITs
The Finance Minister has also announced that Real Estate Investment Trusts (REITs) and Infrastructure Investment Trusts (InvITs) would be allowed to raise more debt capital, which would provide them with additional funds to acquire assets. Similarly, rental housing has received a thumbs up with offer of tax deduction for those undertaking rental housing projects.

Rural Infrastructure:
Ms. Sitharaman has said that the government would increase spending on rural infrastructure development by 34% to ₹40,000 crore and doubled micro-irrigation corpus
to ₹10,000 crore so as to create jobs and boost farm incomes in the hinterland – home to more than 800 million people, whose purchasing behaviour is largely linked to farm output.
The Finance Minister has said that a Jal Jeevan Mission Urban with an outlay of ₹2.87 lakh crore would be implemented over 5 years with the objective of ensuring universal water supply in all 4,378 urban local bodies, with 2.86 crore household tap connections and liquid waste management in 500 AMRUT cities.

She has also announced Urban Swachh Bharat Mission 2.0 with an outlay of ₹1,41,678 crore, to be implemented over 5 years from 2021, focused on complete fecal sludge management, wastewater treatment, source segregation,
management of waste from urban construction, and bio-remediation of legacy dump sites.

The Budget announced a financial assistance package of
about ₹3.06 lakh crore for India’s ailing electricity distribution companies (discoms). The funds will be allotted based on a results-based approach tied to the discoms’ financial
performance. The funds would be spent on infrastructure investment such as installation of prepaid and smart meters, and feeder separation. Currently, all discoms in the country, whether private or state-owned, are monopolies. A framework will be put in place to give choice to the customer in the form of at least two discoms in every market. Transmission assets of the Power Grid Corporation of India will be rolled out under the asset monetization program. Focusing on new energy sources, the Finance Minister has
announced a National Hydrogen Mission. Aimed at scaling up generation of hydrogen from green sources, the Solar Energy Corporation of India (SECI) and Indian Renewable
Energy Development Agency (IREDA) will get an additional capital infusion of ₹1,000 crore and ₹1,500 crore, respectively.

The future steps of Scala – What to expect from upcoming...

Let’s Build a Traditional City and Make a Profit